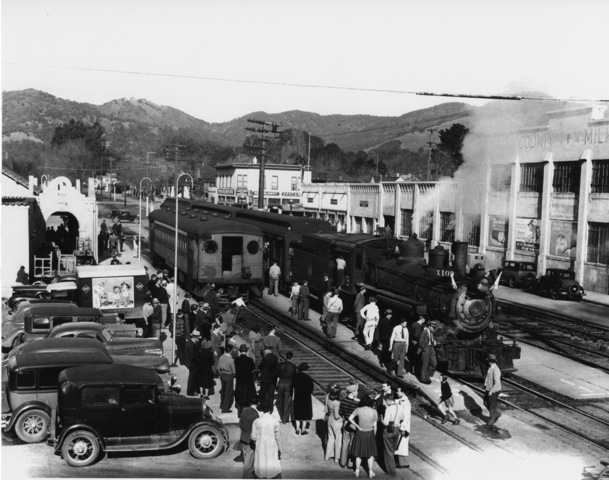 These folks were gathering for an excursion ride on electric commuter cars that used to start people on their trip to work in San Francisco. On this last farewell trip, the electric connection is already gone, and the car will be pulled by Steam Engine 109.

SAVE THE DEPOT DEMONSTRATIONS
3RD & TAMALPAIS 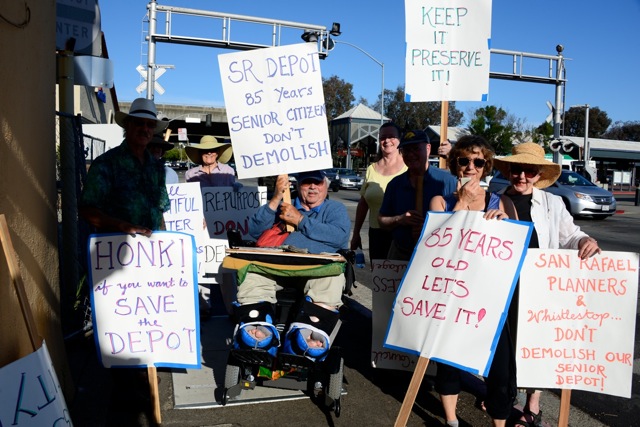 Save The Depot demonstrators get out the word. 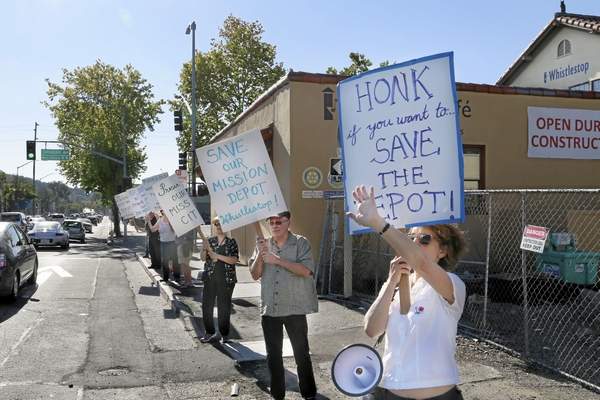 Photos Taken by Ron Steinau July 17, 2015
San Rafael Heritage was organized in 2015 in response to the threat of demolition faced by our city’s 85-year-old Mission Revival train depot, which has operated for many years as a senior service center by the organization Whistlestop.  The present building replaced the original Union Station, which was erected in 1884.

Now Whistlestop wants to destroy the building and erect a 5-story edifice with just 20 parking spaces, that would house its senior activities center as well as 40 residential units for non-driving seniors.  San Rafael Heritage feels that the loss of this historical link to San Rafael’s vital railroad past would be tragic, and that Whistlestop’s laudable goals can better be achieved at a different downtown location.  We are asking city officials to show leadership in preserving the building and helping Whistlestop find a suitable site.

Here is some of our reasoning, based on our on-going historic research:

•Historical importance of Rail at This Site:
San Rafael was isolated before rail.  From 1871 to 1974, railroads, and our station, played a unique role in the economic and cultural development of San Rafael. Rail made possible a fast, reliable connection between San Francisco and Marin, between San Rafael and West Marin, and between Marin and the rest of Northern California.  The town would be a sleepy village without it.

•Prominent Leaders in SR History Benefited from Station:
Many business and community leaders of San Rafael benefited from the development of the railroads and the station.  Among them are:
-William Tell Coleman, Peter Donahue, Ai Barney, Jerome Barney,
E. B. Mahon, Lewis Gerstle, Louis Sloss, and many others.

*Development of Electric Commuter Rail:
Our depot played a role in the technical innovations that made electric commuter trains possible in Marin.  The men who developed these innovations have a great place in American transportation history.  Some of these technologies made modern subways and electrified commuter railroads possible.

•The Depot’s Important Cultural Role:
-Ease of travel made commuting to good jobs in San Francisco possible.
-Thousands of San Franciscans boarded ferries on summer weekends to visit the by way of the railroad from the San Quentin ferry docks.
-The great 1915 Panama Pacific Exposition had its own ferry docks to receive visitors from Bay Area communities, including those who boarded ferry trains in San Rafael.

-The station made it possible for San Rafael residents to easily visit the sophisticated cultural and shopping venues of San Francisco.

•Depot was NWP Headquarters:
Northwestern Pacific, the major railroad of coastal northern California (which eventually took over all the smaller rail lines in Marin and points north), moved its headquarters from Sausalito to the San Rafael depot in 1944.

•Historical/Architectural Importance of Present Building:
-Mission Revival style was chosen by several California railroads when modernizing their stations across the state.
-Building is listed on City of San Rafael’s historical/Architectural Survey as having major significance.
-Whistlestop’s 1980’s depot renovation was completed under City of San Rafael historical and construction guidelines.  The new design retained many original elements to achieve historic and architectural continuity with the original building.
-Whistlestop earned the Marin Heritage 1989 historic preservation award for adaptive reuse of an historic structure.
-SMART’s EIR of 2005 states that our station “appears eligible for National Register significance criteria as an individual property.”

•Restoration of Historic Stations Across California:
More than thirty California cities have rescued, restored, and sometimes re-purposed their old depots; the depots now reflect the individual identity as well as historic pride of their communities.

•Proposed Building Will Have a Negative Effect on San Rafael’s Visual Identity and Architectural Heritage:
-Will destroy a unique, iconic,and beloved landmark that functions now as a welcoming entrance to the city.
-Will present an overly-massive, five-story wall of a building that will forever block the rest of the city from view.  The lot is too narrow and too close to the freeway to accommodate the size of this building, which could be a architectural asset to San Rafael on another downtown lot.